Sand In - Sand Out

I've lived in and around, on and off, La Jolla for almost, gasp, 55 years. I saw the sand movement at WindanSea but never paid much attention to it 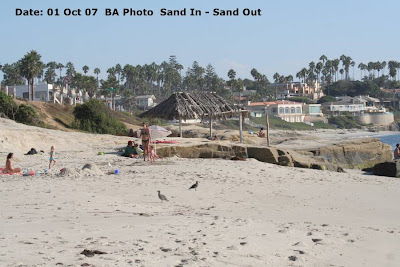 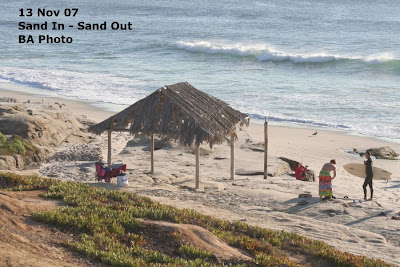 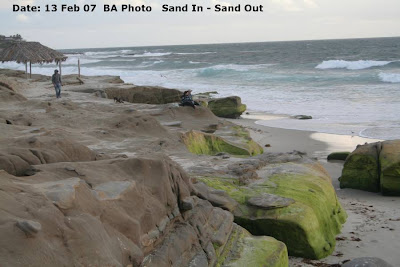 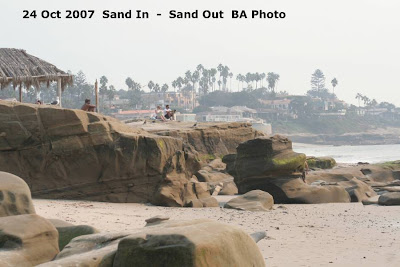 Pretty darn cool that it [the sand] always comes in, always goes out.

Labels: Sand In - Sand Out

"Sorry Dude, I Didn't See You"

This may be a bit harsh - equating him with a someone who is deaf and blind - but the guy dropping in is lucky that Junior is able to maneuver his board skillfully enough to avoid a nasty collision.

Oh well, the guy had a Swedish Exchange Student waiting on the beach for him - He's the latest poster boy for "Chicks Dig Me 'Cause I Surf©!"

I can only speak for myself, so here's another BA Broadside Salvo [BABS] to the surly business owners and their employees in my world:

How's this for a unique / novel idea:

Your business is a physical manifestation of a concept that maybe, just maybe, your customers have a basic human need to feel - at the minimum - somewhat special, kindda appreciated, not disrespected, and to be served by people who at least act like they enjoy serving their customers.

Now, for an even more novel idea:

Your business is a physical manifestation of a concept that people have a basic human need to feel special, to be appreciated, to be respected as individuals, and to be served by people who truly enjoy being gracious, helpful, kind and caring.

Maybe, just maybe, if I received the impression from you and / or your employees that you appreciated my business, I would come back for another visit.

Balsa or Foam Imports or No Imports

I had an interesting conversation with Doug Murphy a few days ago. Doug is Dennis Murphy's (Murphy Surfboards) brother.

I have known both of them - the Murphys - since they were just little surf nazis.

Doug and I were discussing the state of custom surfboards - made in the USA - versus the molded surfboards from SurfTec and versus the cheap imports from Indo, etc.

Doug was pretty sure that the molded boards or the cheap imports would never catch-on, I heartily disagreed!

When I started to surf in the late '50s, balsa boards were still the stick of choice.

Foam boards were rare, but not the novelty item they were a few years earlier.

There were lots of lively discussions extolling the virtues of balsa wood and how crappy the foam boards were.

Naturally, my first few boards were balsa, even though a 40 pound foam board was just as strong as my 50 pound, plus balsa board and lugging an extra 10 pounds to Black's from The Shores was significant.

When I started in the retail surf biz in the early '60s, everything I sold in my shops was made in the US. Wet suits, surf racks, Holo Holo Slippers, trunks, shorts, t-shirts

(Holo Holo Slippers - when I started stocking them, and when the coeds at SDSU and Cal Western would come in for their BLUE HOLO HOLOS - that was surf shop excitement)

Even a lot of the mags are printed overseas.

I think that in just a few years - probably in my lifetime - the "Custom Surfboard" biz will rapidly disappear, and as today's youngsters age, their replacements will have been weaned on imports and molded boards.

Anyway, I'm glad I was involved in the early days of the surf biz, now I'm pretty happy that I'm not [in the surf biz any longer].

Half A Man May Be Better Than No Man?

Another Futile BA Attempt to Organize Random Ideas Into Some Sort Of Clarity: